Since we first started our annual look back at great new bikeways five years ago, we’ve noticed an evolution in progress. First, bike infrastructure has continued to make its way from the big cities to smaller towns and communities. Next, networks have become better connected — more complete. Also, bike infrastructure has become more useful, more beautiful, and more welcoming to all ages and abilities. We’re seeing creative uses of space, innovative structures, and purposeful strategies aimed at establishing healthier communities. Finally, the pace communities are moving from temporary, low-cost solutions for creating separation, to more permanent structures that keep moving cars and bikes apart is increasing. We’re proud of and excited about this list, mainly because it illustrates how diverse infrastructure can be in order to serve an equally varied group of people and places.

These bikeways were chosen for their design elements and innovation. Anything that was a first for the city or area stood out to us. We also took into consideration unique purposes, and really liked anything that connected a community. As usual, we’re huge fans of curb separation and anything that not only makes people safer, but also lets them feel safer.

We’re also pleased to include two Canadian cities on this list, and will continue to expand our BNA maps with data from our friends up north.

Downtown Seattle saw several new protected bike lanes built this year. One such project, which opened in February, was at 2nd Avenue, and acts as a connector for several other protected lanes. The new bikeway includes three new signals in Belltown, which help people cross 2nd Avenue. There were also upgrades to 11 other signals, concrete planters with foot rests, and raised driveway crossings. All of this made for record ridership in the area this year, with a 34% increase from 2017, and a 380% increase from 2014.

Our top slot was awarded for having full concrete separation in addition to numerous innovative bike-specific structures. We liked that it was built off a successful demonstration project that debuted in 2014, and that lessons learned from the 2014 demonstration led to design revisions and more advanced separation techniques. The success of the demonstration also directly led to the permanent installation, doubling the length of the original project. The corridor provides network connections to three other protected bike lane projects feeding into downtown. This project is an example of progress toward a truly complete network.

Like many city roadways, Quebec Street and 1st Avenue were primarily designed for vehicle traffic, and before improvements were made this fall, the streets were in very poor condition. However, after an infrastructure overhaul, the area is improved for people walking, cycling and driving through the neighborhood. New sidewalks were installed, a new traffic light was put in at Switchmen Street, curb protected/raised bike lanes were added on both sides of Quebec Street and 1st Avenue, new on-street parking was installed along 1st Avenue, and new street lights and landscaping were added to the boulevards. The area is now a model for shared space mobility.

Despite pushback from community boards, Mayor de Blasio instructed NYCDOT to move forward with plans for protected bike lanes in Queens last summer. They upgraded a pair of conventional bike lanes to parking-protected lanes on 43rd Avenue and Skillman Avenue. This project upgraded a critical gap in the protected network, connecting Queens Boulevard from Forest Hills to the Queensboro Bridge, adding 2.6 miles of parking-protected lanes. This work follows a significant growth in cycling on Skillman Avenue and the Queensboro Bridge. A critical component of the project was traffic calming and improving connections. In addition to upgrading the bike lanes, DOT also improved pedestrian safety along the corridors by installing a number of painted pedestrian islands, shortening pedestrian crossing distances, and slowing turns.

The J Street Safety Project was designed to calm traffic, improve pedestrian crossings, provide parking-protected bikeways, and make the street more inviting for travel. They chose to add a parking-protected lane to allow people of all ages and levels to bike the grid, separated from moving traffic. Travel lanes were reduced from 3 to 2, encouraging slower vehicle speeds, decreasing pedestrian crossing lengths, and improving corridor safety.

The project came out of the Central City Transportation Plan (Grid 3.0) in 2016, and is a marriage of street maintenance funding and transportation planning. They found that there was a need to calm traffic and improve pedestrian crossings, which was identified by the local businesses and residential community. The project improves pedestrian visibility by moving parking back from the intersection. It also benefits local businesses along the corridor by slowing traffic and increasing ease of crossing the corridor.

So far they’ve built over 25 blocks of parking-protected bikeways this year, and have funding for another 22 blocks.

Victoria’s Fort Street is the second of five lanes in a downtown “all ages and all abilities” bikeway grid that, when finished, will mean that all of downtown is within 400 meters of an AAA bikeway. Fort Street was built with ultimate accessibility in mind, and includes signals to separate left-turning vehicles from bikes, ensuring safety in a busy downtown setting. The new lane replaces a door-zone bike lane that was linked to numerous crashes. The project retained 95% of on-street parking and includes new seating and landscape features, enhanced mid-block crossings, audible pedestrian signals, and new sidewalks.

The Manassas Street protected bike lanes demonstrate that cities looking to install protected bike lanes with a limited budget need not make a trade-off between affordability and aesthetics. In lieu of the standard plastic delineator posts and striping – as well as costly curb and gutter work – Memphis used a combination of delineators, wheel stops, concrete buttons, decorative coloring treatments, and lush planters to protect the bike lanes, beautify the street, and also enhance pedestrian safety. The new bike lanes are in the heart of Memphis’ Medical District Collaborative, which makes the fact that they foster active transportation and healthy lifestyles even more apt.

The Chicago Avenue/Sheridan Road bikeway consists of a 2-mile-long protected bike lane that connects the City of Evanston’s major east-west bike lanes to the Village of Wilmette’s bike lane system, filling a major gap in the transportation system. The goals of the project were to minimize conflicts, provide physical separation, manage conflicts at intersections, provide transit accommodations, and provide network connections.

The centerpiece of the improvement is a 2-way protected bike lane along the east side of Chicago Avenue/Sheridan road that incorporates a cast-in-place or precast barrier separating it from traffic, bend-outs at major intersections, bicycle signals at all signalized intersections and green paint to identify conflict areas. Additionally, the changes improved pedestrian safety by narrowing crossing distances and provided significantly better transit accommodations.

Chicago continues investing in its most popular route for bicyclists – Milwaukee Avenue. This summer, the city of Chicago upgraded half a mile of Chicago’s best street for cycling with concrete curbs. The concrete curbs and end-caps replaced flexible bollards, making the parking-protected bike lane permeant. The project also added Chicago’s first floating bus stop outside the Loop to alleviate conflicts between the high volume of bicyclists and buses during the morning rush. The floating bus stop not only improves safety for bicyclists, pedestrians, and bus riders, but also improves transit operations.

Fort Collins received the highest score in our City Ratings last year, and they continue to make impressive improvements. West Mulberry Street serves as a direct east-west corridor in the heart of Fort Collins’ Big Jump district, connecting residents to schools, the iconic City Park, and ultimately downtown. In 2018, Fort Collins reshaped this previously high-stress arterial to a comfortable bikeway, improving access to bicycling and destinations for the diverse neighborhoods along the corridor. The redesign converted this 1.5-mile 4-lane arterial to a street with 2 travel lanes plus a center turn lane, and protected bike lanes on both sides. The project tests different types of bikeway protection and intersection treatments, including bike rails, concrete curbs, flex posts, and parking protection, while also improving arterial crossings at the intersecting bikeways along the way. The innovative nature of this project extended beyond the bikeway designs to also include a unique arterial street resurfacing approach. This is the first extensive protected bike lane project in Fort Collins, and according to Tessa Greegor, Manager of Fort Collins’ FC Bikes, “preliminary data collection shows a doubling of bike traffic, and an increase in perception of comfort and safety for most corridor users, based on 740 responses to a survey.” This reiterates that the perception of safety is critical for successful infrastructure. 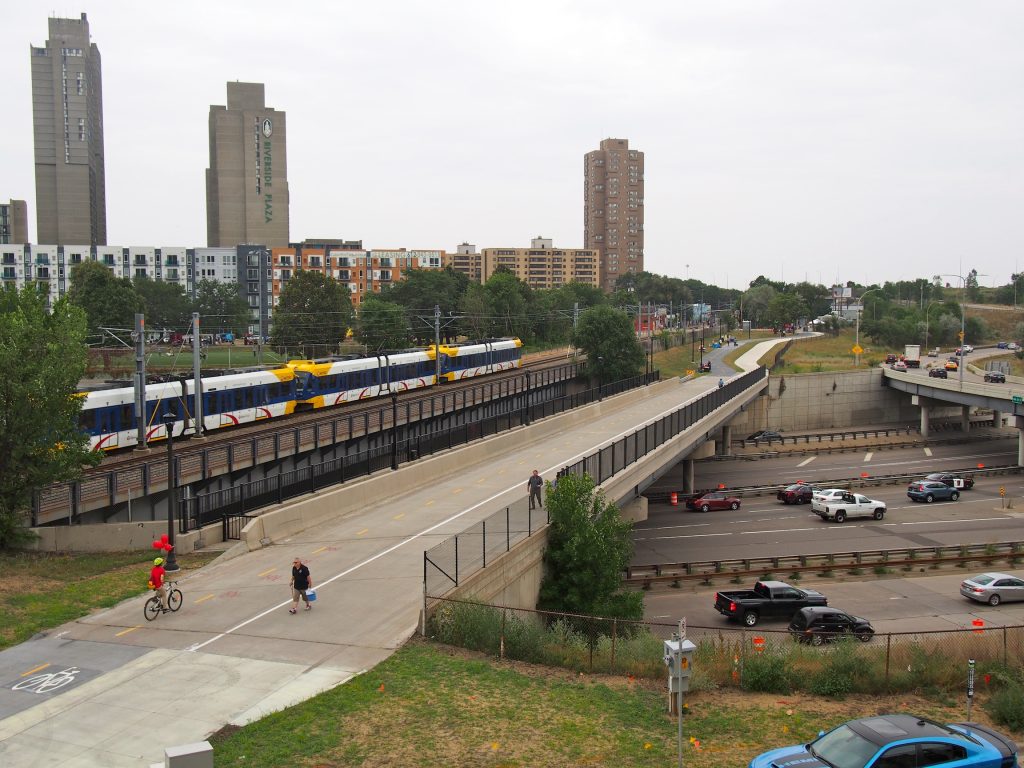 Samatar Crossing is a connection between Cedar-Riverside neighborhood and downtown Minneapolis that repurposed a former interstate ramp into a car-free space for people walking and biking. The neighborhood is home to the largest East African immigrant community in Minneapolis, most of whom rely on walking, biking, and taking transit. The neighborhood was dismantled by freeways surrounding it from three sides in the 1960’s. The trail restores neighborhood connectivity to jobs, housing, commercial areas, etc. According to Abdullahi Abdulle, Associate Transportation Manager, the trail is posthumously named after Hussein Samatar, the first Somali-American in Minnesota to be elected to public office, winning a Minneapolis Public School Board seat.

This year we wanted to give honorable mention to a couple of projects that are not yet permanent, but are significant demonstrations. And also, with more and more companies investing in bike infrastructure and bikeshares on their campuses, we’re featuring a new bikeway that isn’t open to the public, but is a trend we hope to see more of.

The Connect the Crescent Project is a demonstration of a continuous, protected transportation network consisting of enhanced crosswalks, improvements to transit, and protected bikeways which feature barriers separating people biking from automobile traffic on routes leading to and through New Orleans’ French Quarter and Central Business District.

The project was installed by 100 volunteers along Baronne and Canal Streets. Online and intercept surveys as well as automatic and manual user counts were collected during the 90-day demonstration period. The project debuted with the Walk Bike Places Conference which was held in New Orleans in 2018.

Fifteen miles of bike network was installed citywide in 2018, and the 108th Avenue (Downtown Demonstration Bikeway) was the marquee project. It opened in July, concurrent with the launch of the bikeshare, and closed a 0.8-mile gap through Downtown Bellevue, connecting the I-90 and SR-520 Regional Trails.

Preliminary results show that there’s been an increase of 65% in use of bikeway, with 87% of those surveyed feeling safer and more comfortable. They’ve also measured that auto travel time remains the same.

While not open to the public,  The Blue Line is LinkedIn’s new network of bikeways for employees in Silicon Valley. They created the 8-foot wide path in a partnership with Synopsys, and it’s something employees look forward to using each day. Bright blue chevrons painted on asphalt “light the way” to the beginning of the path, then converge into a “uniform swarm.” These chevrons ebb and flow along The Blue Line, intensifying at potential conflict zones.

The Blue Line also features posted signs that mimic transit signage and match other wayfinding features of the campus. Everything is done in blue to match LinkedIn’s company colors. The path weaves between a small redwood grove, and halfway down, a giant elevated mirror helps users see others coming around a blind turn. Riding or walking on The Blue Line is not only a stress-free experience, it’s also just a fun and efficient way to get around.

We hope you’re inspired by these projects, and will continue to help us build safer spaces for diverse mobility.