2019 Top Acceleration Scores, and How You Can Speed up Your Timeline

Cities have the biggest chance to make a difference in their City Ratings score — on an annual basis — with Acceleration. This is about setting plans into motion, getting things ready for the future, and recognizing that changing long-term safety and ridership requires action today. This is where communities can prioritize their work and set ambitious goals to more quickly realize the full benefits of bicycling.

Compared to other scoring systems, the Acceleration factor is unique to the PlacesForBikes City Ratings. What we’re measuring here is how committed a city is to growing bicycling quickly. This factor is designed to identify cities that may not provide a great bike riding experience today but are doing all the right things to grow bicycling over the next three to five years. Acceleration scores are based on:

A top score in Acceleration indicates that the city is changing, the city has aggressive plans to make things better, the infrastructure they’re planning to build is going to create a low-stress environment to ride bikes, and the public generally feels that the momentum is moving in the right direction. Acceleration is all about investing in a more remarkable future.

Memphis, Providence and New Orleans are among our top scorers in Acceleration, and are all Big Jump cities. These places have made plans and goals for the kinds of changes that can improve a community and complete a network.

Bikeways and Pedestrian Manager Nick Oyler says that Memphis’ rapid progress with its bikeway network is thanks in large part to the leveraging of community partnerships and existing processes. “The city is limited in capacity and resources, so we actively seek out collaboration with community development corporations, local non-profits, and other private organizations to facilitate project funding, outreach, design, and implementation.” Oyler says that he’s seen more and more people in the community recognize the value of safe streets. “People are eager to work with us to make improvements.” Rather than reinvent the implementation wheel, Oyler says, “we formalized the inclusion of on-street bikeways as part of our annual resurfacing projects. As a result, we have a relatively easy expansion of the network every year in addition to the more limited and complex grant-funded and capital projects.” Memphis has also launched and made plans to expand their bikeshare program in the last year, which makes biking a realistic option for more people. 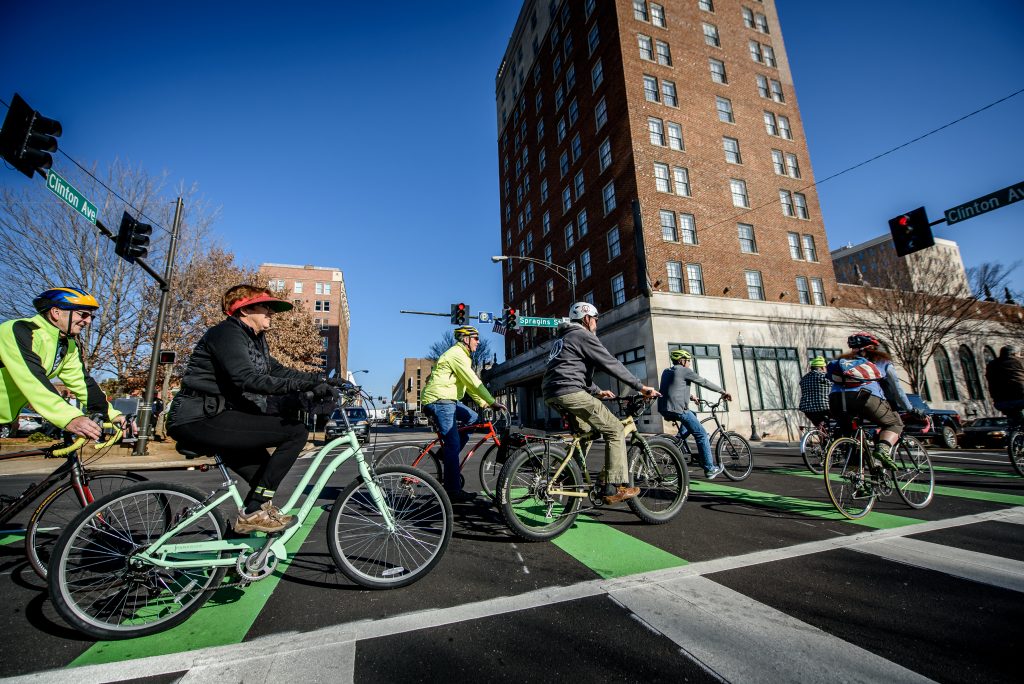 Dennis Madsen, Manager of Urban and Long-Range Planning, encourages city planners to travel for professional development – even just to other cities in the region – to learn from what others are doing. Madsen has traveled to Fort Worth, Pittsburg, and Durham in the last few years, to study infrastructure that’s working. “The best way to learn is to see how our peers are doing things. There’s so much to be learned from the experiences of others.”

In an effort to inform the community, Madsen says Huntsville just published their first annual alternative modes review so that the public can see what’s in the works. “We wanted people to know what we’ve done in the last year, and what’s coming in the next several years. We want to be transparent, so the community knows what to expect from us.” Madsen says city planners can take a lesson from the restaurant industry in that people are willing to wait for something good as long as the server comes out of the kitchen every once in a while and lets them know what’s going on.

Huntsville is currently working on closing the gaps in their network that are scattered throughout the city. One of their bigger projects involves a greenway in south Huntsville that connects to schools and the riverfront area. Madsen says they’re not only adding bicycles facilities but also new pedestrian walkways. “We’re hoping not only to create alternative transportation options but also to incentivize development along the corridor as well.”

Matthew Mihalevich, Trails Coordinator says Fayetteville has a unique trails program geared at designing and constructing as cost efficiently and quickly as possible. They primarily utilize in-house city staff. Mihalevich says when a trail is designed and the necessary property is acquired, their 9-member city trails construction crew builds the trail as part of the Transportation Division. Once the trail is complete, the Parks and Recreation Department oversees the maintenance and event programming. Mihalevich says this in-house crew allows them to bypass some of the things that stall projects in other places.

After a trip to Boulder and Fort Collins a few years ago, Mihalevich says the Fayetteville team set several new plans into action to create a more complete network. “We now have a significant number of tunnels and underpasses where we’re pulling away from busy intersections so that it’s a comfortable experience for all ages and all abilities. That was definitely a take-away from Boulder’s network.”

In cooperation with the University of Arkansas, Mihalevich says, “We’re working on a new project — Maple Street Cycle Track — it’s currently a 3-lane road and we’re taking it down to 2-lanes and adding a 10-foot 2-way cycle track with an 8-foot sidewalk behind it.” This is a significant connection from the Razorback Greenway to campus. Mihalevich says, “We’re excited to create a safe and comfortable route to our biggest destination in town.”

In 2018, Fayetteville partnered with Veoride, the University of Arkansas, and Experience Fayetteville, to launch the first dockless bikeshare program in Northwest Arkansas. The program includes traditional bikes and e-bikes throughout the city.

Both Fayetteville and Memphis received a near perfect 5/5 on acceleration. What are they doing that generates that “perfect score?”

Recommendations for speeding up your timeline: