The Best-Kept Secret of Dutch Biking: The Dutch Hardly Bike at All

Biking in the Netherlands

Here is perhaps the most shocking chart in all of Dutch transportation:

It shows the number of kilometers the average Dutch person bikes per day, in cities of various sizes.

That’s three-quarters of a mile.

Is this an error? I asked around for a comparable estimate at the national level. As of 2017, that estimate is 2.5 km. So, 1.5 miles per person per day.

Either way you count it, the Dutch hardly bike at all.

So where on earth did all these people come from?

This question becomes even more confusing when you look at this chart (shared, like the last one, by Saskia Kluit of Fietsersbond, the main national biking advocacy organization) showing how many trips Dutch people take by bike:

The left axis shows bike trips as a share of all vehicular trips. In the biggest cities — Amsterdam, Rotterdam, The Hague and Utrecht — bikes carry about 40 percent of all non-walking trips (a share that’s been rising fast over the last 10 years). For smaller cities, that percentage trends downward as low as … 33 percent.

The Dutch bike all the time.

How can both of these things possibly be true?

The answer is in this third chart, which shows which modes Dutch people choose for trips of various lengths:

Summary: Dutch biking rates are highest for trips of about 1 mile, and when trips get longer than three miles, bike trips start to fall sharply while car trips rise.

The Dutch are not so different from you and me. Most of them don’t much like to bike more than three miles at a time, either.

This leads to our final question. What, then, is different in the Netherlands, aside from the low-stress bike infrastructure that makes biking so attractive for short trips?

The answer is that Dutch cities are different.

If you were to ask a space alien to compare a Dutch city to an American city, the biggest difference they’d see would not be the streets. It’d be the stuff between the streets — the buildings.

This level of urban development isn’t just unusual in almost all of the United States. It’s illegal. Utrecht, the city in the first photo above, has approximately the same metro-area population as Wichita. But because most of its central city was built before the passage of laws that required minimum lot sizes, maximum numbers of homes per lot and lots of on-site car storage everywhere, everything in Utrecht is much closer to everything else than anything is in Wichita.

You can see the result in this chart: 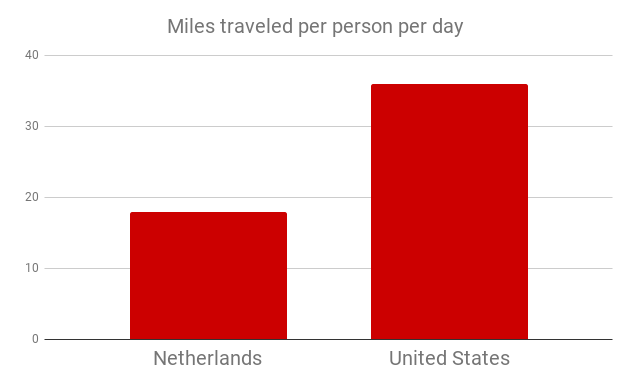 It’s a tall order. But the 2017 National Household Transportation Survey, newly released in May, includes strong evidence that it would work.

Even on America’s stressful streets, the closer you live to other Americans, the more you bike. And the big gains for biking don’t occur when you go from low-rise apartments to Manhattan-style skyscrapers, either (that’s the last two density categories in the chart above). They occur when you go from detatched houses to two-story attached townhouses on side streets and four-story walkups on bigger streets. In other words, the big gains for biking occur when you reach the density of Europe’s famously beautiful and livable cities.

As we head home from the Netherlands and prepare to integrate the ideas we’ve learned here into our work in the United States, this should be one of the ideas we remember.